Current state of used Pallet Racking in Georgia - Be Careful !

Good economic news and a strong economy is bad news for used pallet racking - it's a bit like a strong US dollar - Gold isn't happy !   As the economy strengthens there is less used racking which drives up the bidding to obtain it and ultimately kills the used market -- the cost between used and new narrows resulting in the risk of used outweighs the extra cost of new 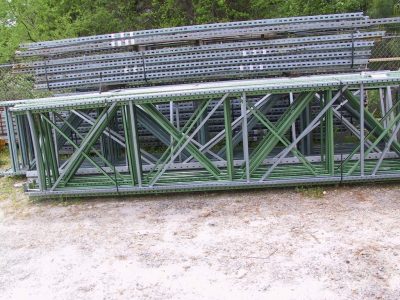 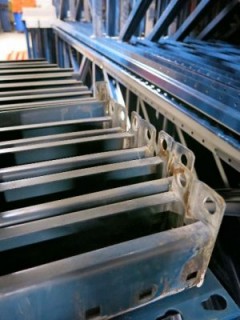 Typical Base Plates of Used Racking

So .... Refurbished -- "like new". This descriptive is often used by the larger used dealers who have shops set up to handle greater volumes of used racking. What does this mean ? -- Simply put - it means repainted. And it should be noted that painting over powder coated surface doesn't assure that your newly spruced up purchase will remain that way. This, of course never addresses the unknowns -- gauge of steel being foremost. I love the saying "lipstick on a pig". I believe it originated from the used racking industry!

Is all used Pallet Racking supposed to go together ? Did it all come from the same manufacturer and at the same time ? Did the manufacturer change anything in their product since it was initially installed ? Oddly the "refurbished" mentioned in the previous paragraph further clouds the answer .. or "hides the answer" may be a better way to put it. I have not mentioned the legal ramifications of used pallet racking. Picture a failure of some sort in your racking system, maybe just bad judgment from a fork lift operator. It is discovered the racking was purchased used or refurbished, albeit the same color and general arrangement as other racking in the facility. It originates from two or more manufacturers, there is different gauges of steel (thus capacity) discovered and the racking ranged in age from 5-15 years. I don't have to emphasize that the legal ramifications in this situation are great. Certainly none of the blame goes back to the original manufacturer.

OK - you found some used racking, the previous owner shows you the structural calculations and / or details of the product and you are sure the documentation fits the racking -- Good for you ! Of course there are deals out there and I'm certainly not insinuating that all used is a poor choice -- but ...."buyer beware". Its not always just cheaper product that works and acts like new!

Material Handling Solution Providers that focus primarily on new product tend to be more service oriented, employ more people and pay their employees much better that the typical used supplier. If the price point isn't much different I encourage you to support the SOLUTION provider.

32 year leader in the materials handling industry and co-owner, with my wife Janelle, of McGee Storage and Handling since 1999. McGee has led the metro Atlanta area in ideas, integration and implementation of storage solutions since its inception.